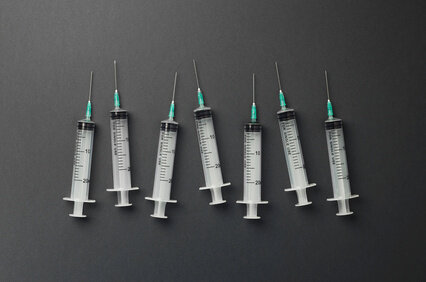 In the last post I gave an introduction to dependency injection, where I described what it is, how it can be achieved, and the motivation behind it. We left off by providing an example in an ASP.NET MVC controller, where we manually “newed up” dependencies inside the constructor of a controller. In this post we will take a look at dependency injection frameworks and see how they can help us manage dependencies.

What Does a Dependency Injection Framework Do?

Whenever we instantiate a concrete implementation of an interface (something that is done in one line of code), we are actually doing two things: 1) choosing which implementation to use and 2) creating the instance of that implementation:

At the simplest level, what a dependency injection framework (DI framework for short) does is assume the responsibility of creating objects that implement our interfaces.

When using a DI framework, we won’t need to “new” objects up manually anymore. We just have to tell the framework which implementation to use for which interface. For ASP.NET MVC applications, this is typically done somewhere within the Application_Start method of Global.asax.cs.

Most DI frameworks also provide the capability to hook into the MVC infrastructure. This will allow dependencies to be injected into a controller’s constructor.

To demonstrate how a dependency injection framework can be used, I will use the SimpleInjector framework.

SimpleInjector can be installed via NuGet. We will actually be using a few packages here. Go ahead and install the following package from NuGet first:

Now let’s create a simple interface and a sample implementation:

Next, we need to tell the DI framework which implementations to use for which interfaces. In our sample we only have one interface that has a single implementation, so the code will be short. But even if there are many interfaces and implementations, the pattern will be the same.

We can put the dependency registration code in the Application_Start method of Global.asax.cs:

And the setup is complete! Now it’s time to try it out.

First, let’s modify HomeController. Let’s add a constructor that takes an instance of ITestService and save that off to a private field.

Next, we try _testService out by using it inside the Index method:

Now, put a breakpoint at the beginning of the Index method and debug the application. Step through and observe the Output window - you should be able to see the “Hello World!” text. Hooray!

Earlier, we said that a DI framework assumes the responsibility of creating implementations so that we don’t have to do it ourselves. That is already a huge benefit, especially if there are many interfaces implementations and / or there are long dependency chains.

But there is another advantage to this: the DI framework can decide how and when to create the implementation. It can “new” one up every time, use a single instance always, or “new” one up for each HTTP request and reuse that same one throughout the entire request.

To see this in action for the SimpleInjector framework, install the following NuGet package:

Next, come back to the Register call in Global.asax.cs. Now we can use the overload that takes a Lifestyle parameter. SimpleInjector has three kinds of lifestyles:

With this setup, the TestService implementation will be created for each HTTP request and used throughout the entire request, no matter how many classes have a dependency on it. The Per Web Request Scoped lifestyle is particularly useful when registering custom DbContext implementations. Each HTTP request typically corresponds to a single user action, and we normally would like to share the same DbContext instance in a single request.

This concludes our two-part series on Introduction to Dependency Injection. I hope you have gained a better understanding of what dependency injection is and its practical use in web application projects.